A truck accident in Raleigh, North Carolina claimed the life of a well-liked Wake Forest High School English teacher on Tuesday. The Raleigh truck accident was first reported at around 4:30 p.m. on Capital Boulevard near Burlington Mills Road in Wake County.

Local law enforcement officials say the Raleigh truck accident involved a Toyota Sienna minivan, a Honda passenger vehicle, a Freightliner dump truck hauling a bulldozer and a tractor trailer. Reports have indicated that 42-year-old Wake Forest High School teacher Michelle Simone Barlow was either slowing or stopped on the northbound side of Capital Boulevard when her minivan was rear-ended by the Freightliner dump truck. 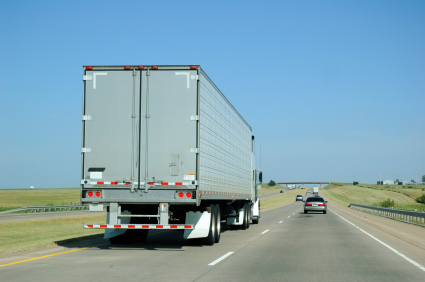 A man who lives in the area told local media outlets that the truck crash sounded like two explosions. “It was so forceful, the windows in the house rattled,” he said.

The impact of the initial collision pushed the minivan into the rear of the tractor trailer, which was then pushed into the Honda passenger vehicle. Lt. Jeff Gordon of the North Carolina State Highway patrol said the impact resulted in Barlow’s death. Pictures from the scene of the Raleigh truck accident showed the minivan crushed beyond recognition.

According to Lt. Gordon, 29-year-old dump truck driver Donald Wayne Caulder of Laurinburg and 49-year-old tractor trailer driver Marvin Douglas Erb of Danville, Virginia were both taken to WakeMed Hospital with injuries not considered life-threatening. WRAL has reported that Caulder has a history of eight driving-related traffic offenses dating back to 2008, though seven were dismissed. The 29-year-old has been convicted in the past of driving without a license.

Accident investigators are conferring with the Wake County District Attorney’s Office to decide whether Caulder should be charged for his role in the Raleigh truck accident. Any charges are pending the outcome of an investigation.

Ms. Barlow leaves behind a husband and two daughters. She began working in the Wake County Public School System in January of last year, first teaching English at Panther Creek High School, then most recently at Wake Forest High School.

In truck safety news this month, The Federal Motor Carrier Safety Administration (FMCSA) has unveiled a newly-proposed training rule for entry-level commercial truck and bus drivers. The new rule, which has been in the making for several years, was born out of a Congressional mandate under the ‘Moving Ahead for Progress in the 21st Century Act’ highway bill that passed in 2012.

Under the proposal, drivers seeking a “Class A” commercial driver license—which is necessary to operate a combination tractor-trailer weighing 26,001 pounds or more—would need to receive a minimum of 30 hours of behind-the-wheel training from an FMCSA-approved instructional program. Applicants must also perform at minimum 10 hours of vehicle operation on a practice driving range.

Those applying to obtain a “Class B” commercial driver license—which is necessary to operate a heavy straight truck (such as a dump truck), motorcoach, school bus or municipal transit bus—would need to receive a minimum of 15 hours of behind-the-wheel training from an FMCSA-approved program and perform at least seven hours of vehicle operation on a practice driving range.

This mandatory training would apply to all 50 states, all U.S. territories and Washington D.C. All new commercial driver license applicants, those seeking a license upgrade (i.e. individuals holding a Class B that wish to seek a Class A license) and previously disqualified commercial driver license holders who wish to reacquire a license will be subjected to new training proposal.

The FMCSA has estimated that the new driver training proposal will cost roughly $5.55 billion over the course of 10 years. The agency believes that the cost will be counterbalanced by the net benefits to commercial trucking and bus operators, the traveling public, and the environment.

With new training requirements, the FMCSA predicts improved driver performance, which, in turn, will reduce the frequency and severity of truck accidents across the country. The FMCSA further believes that the proposal could cut carbon dioxide emissions by teaching drivers about fuel-efficient driving techniques. Costs to the trucking industry are predicted to fall as well, as the promotion of safer and efficient driving should reduce maintenance and repair costs.

The importance of having more informed, better-trained commercial truck drivers on the road cannot be understated. Should it be enacted, this driver training proposal will save lives.